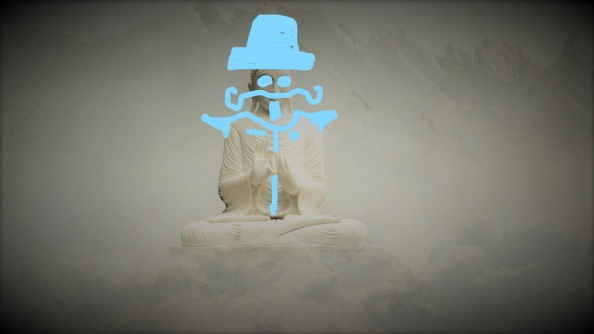 Lord Buddha was born as the son of Suddhodana and Mayadevi at Lumbini near Kapilavastu. He was named Siddhartha, that is, ‘He who has accomplished his purpose’.

Suddhodana invited a rishi to see the royal child. On seeing the child the rishi prophesied, ‘ The supernatural signs indicate that the newborn child will bring deliverance to the whole world.’ He, of course, warned the king that the boy might renounce the world at any time should he come across the diseased, the old and the dead.

Authors Note : one would think that for someone who was to bring the whole world into ‘deliverance’ that coming across a few infirm people would be part of the parcel. But apparently even the Buddha has his limits.

The king was very much alarmed to hear this – A/N As he should be. He got Siddhartha married at an early age and almost imprisoned him in a pleasure garden providing therein all kinds of enjoyments. The inevitable happened. As the chained elephant longs for the wilds, so the prince was eager to see the world. A/N But apparently not too eager to see anyone who is old sick or otherwise not well. Go figure. The streets were decorated and the city bore a festive appearance. Siddhartha, in the course of his visit to the city, came across an old man, a diseased person, a dead body, and at last a sannyasin. Being told that the first three were not rare scenes, but the inevitable fate of all living beings, Siddhartha was very much perturbed and plunged into a deep thought.

Authors Note – Oh my word, you would think that a person who is supposedly as enlightened as he is, would know what the hell death is, but oh no, he is so pure that this very obvious, some would argue, most obvious fact of life just seems to elude him, and the first time he sees it, he is plunged into deep thought? What did this guy somehow live in a time with no wars? No politics? Where the hell was this garden anyways? on Mount Everest? This guy is starting to sound more like rapunzel than buddha.

Anyways all of this was taken from those books I have been drawing excerpts from. The same publisher and the whole shabang. So if you wanna know who wrote it, look at my older posts.